A NORMAL AND NATURAL RESPONSE TO A SUPERNATURAL ENCOUNTER: PART I

And in the same region there were shepherds out in the field, keeping watch over their flocks by night.  Luke 2:8

When you stop and think about it, there are many intriguing stories within the biblical “Christmas Story”.  My personal favorite account describes those lowly shepherds who were the first ones to hear the beginning of the greatest news story ever broadcast.

Sure, we routinely refer to those shepherds as “lowly”, just as I did in the opening paragraph.  But, it is difficult for us to truly understand their place in the culture of those days.  Even though they certainly provided a vital and necessary service, they were pretty much outcasts.  And yes, many of the lambs under their capable care would be available as sacrificial ones whose blood atoned for the sins of the “respectable folk”.  Not to mention providing them with food and clothing.

So, what made them so lowly?  For one thing people in those days considered them “unclean”.  Having seen first hand Quichua shepherds tending flocks of sheep and goats in Ecuador, I can assure you those Luke 2 shepherds were continually immersed in a grimy occupation.  From 5-year-old children to very aged women, those indigenous people of the Andes mountains spend all their days getting their feet (often bare) and hands continually stained with soil, plant matter and every imaginable substance associated with animals.  Added to all of the physical uncleanness was the ceremonial uncleanness placed upon the shepherds of Luke 2 by the Levitical laws of those days.  You see, the shepherds who were chosen to encounter the host of angels one holy night were rarely able to get to the temple for ceremonial cleansing because of their responsibilities of caring for sheep and goats.

Hopefully you are getting the picture and maybe even catching a little of the scent of the scene unfolding on a quiet, lonely hillside pasture not far from Bethlehem.   But why those people?  Nothing is given to us in the Bible without significance.  And trust me, I know how shallow my understanding still is of the manifold richness of God’s Word.  But, one thing is crystal clear.  Those lowly shepherds who heard the Good News of the newborn Savior make it clear the news IS meant “for all people”, beginning with the lowliest of them all in that day. 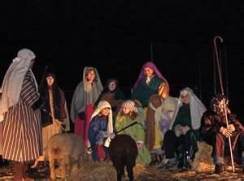 And they along with so many other biblical examples show us God uses the most unlikely people in His kingdom work.  As we will see later in Luke’s account, He had some extremely important assignments for them to carry out which were meant for no one else.  Whatever your occupation, profession, or calling is in life, God has a plan to use you in His kingdom work.  Never doubt it and do not miss it!  We will explore how that might be revealed to you in upcoming blogs based on Luke chapter 2.

Imagine yourself slowly passing a long 18-wheeler on an interstate highway, and you notice it’s an Alias Van Lines truck. Next thing you know, you’re wishing you could see inside and get some clues about the family involved. Where are they from? Where are they headed? Why are they moving? Sure wish I could know their story. Every family has a story, right? Think of docsology.net as that moving van. The good news is that you are invited to look inside and look around. Open the boxes marked Faith, Family, Finances, Fishing, Furry Friends. There’s even a surprise box marked Random. Inside each box you’ll find a variety of carefully wrapped treasures. Some you will find to be inspirational. Some with a definite educational slant. And yes, often you will unwrap a downright intimate look into one of those passions that have shaped a lifetime. So, come on in and help yourself. The treasures are created for people like you to inspect, handle, and critique. That’s why we’ve made it easy for you to comment. Of course, it’s all free, but if you want to leave a tip, do that by passing docsology.net along to your friends on your favorite social network. Another place to find me is www.StevePearsonInk.com
View all posts by drpearson3 →
Aside | This entry was posted in A NORMAL AND NATURAAL RESPONSE: PART I. Bookmark the permalink.

1 Response to A NORMAL AND NATURAL RESPONSE TO A SUPERNATURAL ENCOUNTER: PART I